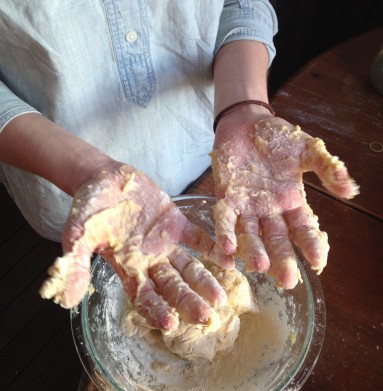 Growing up, my parents weren’t super concerned with making things from scratch. Most of the food we ate came from mixes or pre-made starters or wrappers, and aside from hobbies like drawing and composing, we were more likely to run out to the store to pick up a needed item than to try to make it on our own. That isn’t to say that our house wasn’t bursting with creativity (I mean, my dad is a jazz trumpet player, and my mom a wonderful artist and actor), or that we didn’t eat well–we always had fresh fruits and veggies at hand–but there also wasn’t any emphasis on how good it feels to make something from the bottom up.

When I got to college and became friends with a bunch of Vermonters with hippy parents, my eyes were opened to the idea that you really could make most things that you bought in the store by hand–through some magical process, you could mix together flour and water and yeast and you’d get bread. You could put a seed in the ground and get vegetables. You could slice up apples and make apple turnovers. And not only could you produce those things, but once you did, they tasted one million times better than anything you got in a store or restaurant–were one million times more special than something you’d picked out from a shelf.

Needless to say, I was quickly hooked.

The idea of making things by hand isn’t a new idea. I mean, before factories and industrialization, everything was homemade. But I do think that there were periods in history when the value of creating goods with your own two hands was less valued, particularly during times when there were bigger things on people’s minds–like a recession or war. Add in grocery and general stores where it was suddenly very convenient just to race out and pick up everything you needed fully formed, and the idea of making things by hand died back a little. Recently however, the DIY lifestyle has exploded. People, ranging from hippies to hipsters, to new moms to old dads, are trying their hand at this homemade stuff instead of bopping over to Walmart to just pick it up for easy and cheap.

After a couple years of observing how it was done, I began to take the work of creating into my own hands. I became co-President of the Sustainable Foods club, where I helped run a community garden and planned monthly get togethers for our crew–where we mixed and stirred and chopped our way to delicious, homegrown and home cooked meals.

I discovered that I adored watching vegetables grow and ripen, that when you’ve grown it, you cherish every bite that you take. It’s a totally different way of eating. Suddenly, eating wasn’t just a vital function to living, it was also a challenge. A total and complete joyous challenge.

Add in a visit to a friend’s boyfriend’s farm, where we helped milk the cow and then ate the butter made from it the next morning, and munched on burgers that had grown on the land, and I began to realize how much you really could do by hand. And not only that it could be done, but that there was so much joy in doing it. There is absolutely nothing like eating something you’re proud of. It makes you feel alive.

And it’s not just food that can be transformed, but other things too. Tables, hats, rugs. Material goods that are meaningless when we pick them up from a store (because millions of other people have the same exact one), become so much more when you’ve created it by hand.

It’s becoming a reflex to stop and say “wait, can we make that?” before we rush out and buy something. I learned how to knit so that I could make us blankets and hats. When Chara needed a new collar, instead of immediately popping over to Petco and picking one up, I perused the used belts at Salvation Army.

And for the things I can’t make, it’s made me value the people who can make them. Instead of taking the easy way out and buying products from big brand names, me and Jordan have made an effort to seek out small businesses and individuals that create things. We bought Chara’s harness from the wonderful Groundbird Gear company and get her marrow bones from a local butcher (can you tell that the only thing we really spend money on is Chara?). It makes it so much more satisfying to spend your money when you know it’s going to someone who has worked hard to earn it. And it makes that purchase so much more special in your eyes, because you can see where someone else’s hands have molded it. 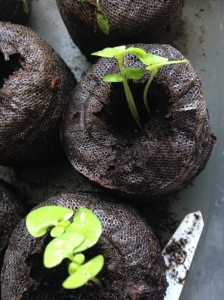 Get email updates from the blog:

Find me on IG: